Lovely short documentary about the Mark Morris Dance Center initiative to provide dance sessions for Parkinson's disease patients, "There are no patients, there are only dancers." The classes provide relief from the symptoms. As a challenge, the group of about twenty put on a performance of Mark Morris dances including Mozart, X Variations improvisations, and Short Waltz. Not a tear jerker, but a sincere expression of hope, and emotionally satisfying. As usual with modern dance, attendees were family and friends.
I would like to be part of such an effort. Last summer there was a group on Cape, but now the closest is in Rhode Island. I can go to Middletown or to East Providence to observe. Then I can put in some time with video training and finally, go to NYC for a course. And then would I get a group to lead, a space to hold class, funding?
Posted by Ellen at 1:15 PM No comments:

Back to DWTS - and it's the finals!

A good season, and last night's show was as good as I've seen. Of course, I had to watch it On Demand the next day, today, because the Patriots on Monday Night Football superseded ABC's programming on every possible channel.
I thought I could watch it live stream, but no, not in my area. Just the webcast of chat and a camera on the judges, or the floor from the nosebleed seats, or the red room, no thanks. That webcast is for people who need always to have two screens running.
So, On Demand, not DVR, meaning no fast forward through the commercials.  What I did: the laundry, a shower, weeds for the chickens, etc, and then some rewind.
Opening number, Carlos with a sexy Foxtrot. I wanted to be him, not his side-kick, blond Witney. Bruno got him to use his lats - like Val a few weeks ago - and to use pressure on the floor for better footwork.
Next, the soldier who still can't move his hips for a Rumba, oh well.
Nick's Jive got a perfect score, but I didn't love it.
Bindi's Quickstep blew us away.
Freestyle: Carlos did hip-hop, a crowd pleaser.
Nick's amped up stage number to his biggest hit from his boy-band days, perfect score.
Alec in an army obstacle course, should get votes.
Bindi's duet made everyone including me cry with its beautiful evocation of her beloved father - Footprints in the Sand.
Finale tonight. Carlos is gone. Bindi has to win, even though Derek is Mr. Mirrorball.

A stupendous event!  All our work paid off. The bank account is fatter. The community of dancers is closer. We all had a wonderful time. Tired,  yes. But happy.  Fulfilled,  even. I think we'll be ready to do it again in two years. 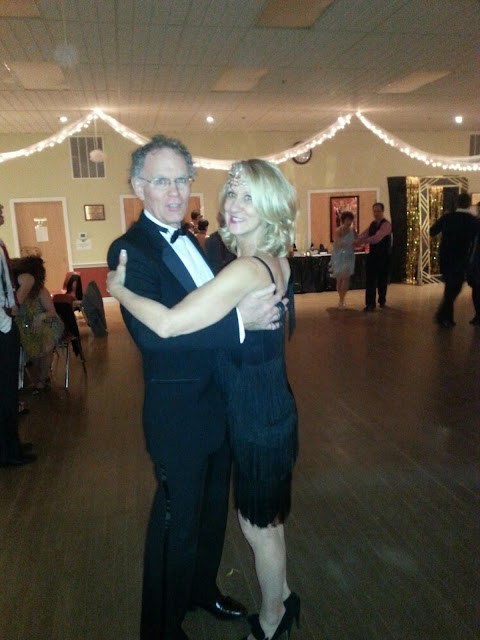 Emails to previous attendees warning them of a sell-out crowd, setting up silent auction sheets, table shuffling, contacting the venue, revising the speech, revising the program, depositing checks, mailing tickets.
Next I'll make the biscotti my committee told me would be my best contribution to the refreshment table.
I would rather go outside, but it's raining anyway.
A private lesson to teach at 1:00 - get out of the house!
Posted by Ellen at 9:34 AM No comments:

For the first time, I have 13 year old students in my studio class!
I taught younger ones in the middle school, but these kids sought us out and have stayed for a couple of months now.
So I invited them to the Big Dance November 14. Parents too, of course, as driver and companions.
Feels right for the scholarship fund to have young people there.