My sister had a new theory to expound about over Christmas: ketosis, which has a bad reputation, is more truly a natural phenomenon where the body uses its stores of fat instead of ingested carbs to produce alternate and better brain food.
Diabetics are aware of ketosis because it is a symptom of their inability to process carbs.
Through dietary ketosis, some epileptics obtain relief from seizures.
In our family, we are looking at (our father's) Alzheimer's disease. Perhaps ketosois could help, but he is getting feeble and very strongly opposed to exercise. Our mother was particularly taken with a link to coconut oil, a medium chain triglyceride which seems to have some of the same effects as the ketones to nourish the brain, and some sources claim the effects begin the same day.
For ourselves, my sister and I tried out the extension of the overnight fast into early morning exercise.
For Dad, I cooked a lot with coconut oil - delicious. Mom is less of a cook.
Coconut oil detractors cite saturated fat and a strain on the heart over the years. At his age of 87, we guess it's going to be the heart or the brain.
Posted by Ellen at 8:30 AM No comments:

Some good choices: Rhodes on the Pawtuxcet, CCBD at Betsy's, local bands.
Ideal for me is not a sit-down dinner.
I want Cheap, Local, Good dancing.
So I'm trying out a dancers' party in Falmouth.
Guest list: my students, past and present.
It's late to be planning, but that's the way it happens sometimes.
OKAY 8-11 PM Cape Cod Conservatory BYO food $7.50
Posted by Ellen at 5:46 AM No comments:

I love it when I get more tips on how the music and dance interact.
My Flamenco teacher began explaining the rhythm of Bulerias, a dance of fun and foolishness. The rhythm of 12 is divided into 4 triples or 2 sixes - or 2 triples and 3 twos. Begin the dance on the count of 12. End it on the count of 10.

Really I prefer something simpler - Swing. The downbeat, or first beat (called "down" because the conductor's baton goes down at that point - Time to Start!) is less important in swing. The upbeat, coming before the downbeat, leading up to it is also fun but not where swing dancers put the emphasis. The backbeat You can't lose it!), or the even count, is more important.

Phrasing is another factor to pay attention to. Robert Royston, West Coast Swing teacher, suggested noticing the Tonic chords that can signal changes.
Posted by Ellen at 5:37 AM No comments:

Here we have the state of dance in Provence, France. 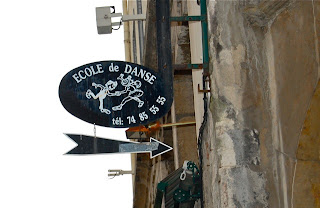 Ron's steps look harder than they are, I think.
If I analyze them while doing, I get confused.
Analyze ahead then attack!
Last night, his philosophy of timing came out. "Add a couple steps, who cares!"
In swing, you keep the feet moving for an extra 1,2. It fits!
This is similar to the Argentine Tango rule - he can stop any time in that close hold.
Posted by Ellen at 4:47 AM No comments:

Johhny Hoy and the Bluefish were fabulous last night - not all that crowded at Grumpy's, thankfully since remodeling is gong on in the side area - couch type booths going in, they said. I said, "While you're at it, how about a floor?!!"
"It's an historic floor," said the owner. "Put in by Helen Keller." He means the guy must have been blind.
I said, "I've had an historic dream for twenty years that you would put a floor in."
Crazy. When I asked Harry's, "Why carpet?", they said, "To soak up spilled drinks." Yeah.
Anyway, there was Lance with shag, west coast, and swing, plus he seemed to have a new funk style he may have made up himself, barely followable.
Posted by Ellen at 7:41 AM No comments:

I missed this scientific result from the 90s - and now it's being held in question.
The accepted wisdom always was if you described something, it helped you remember.
Then Jonathan Schooler used the scientific method to test it and found the opposite effect.
However,a fascinating New Yorker article called "The Truth Wears Off" reports that replicating results, the gold standard of the scientific method has shown a decline effect. Not just for this verbal overshadowing (good name) but also for a theory of the sexual appeal of symmetry, and tons of other scientific findings.
Jonathan Schooler joked, "it was like the cosmos was habituating to my ideas."
Anyway, you don't know what to believe any more, if you ever did.
So my question is: How helpful are dance notes for remembering choreography?
I write them out for people, but maybe just a few clues are best, and then people need to tap into muscle memory or something, if verbal overshadowing is true...
Posted by Ellen at 5:13 AM No comments:

I really enjoyed this book I found at Joe's sister's house. I also got a couple of novels and mysteries. She's a librarian and has her aches and pains, but the approach must not have been what she wanted. It looks brand new.
Most of the content is excellent stretches, my favorite, so I borrowed The Core Program from the library to study Ms. Brill's other ideas, looking for ab exercises that aren't done on the mat (my older, out of shape ladies cannot do mat work). She defines the core as the entire torso, and I found only one non-mat ab exercise.
The idea must be to get into good enough shape with the stretches so that you can do the mat work.
Posted by Ellen at 5:42 AM No comments:

Heard a radio description of some iPhone and iPad art and its ephemeral nature, only existing on the device, only there as long as the technology is supported.
Still endures longer than a dance.
Posted by Ellen at 5:33 AM No comments:

Success has to be measured in increments.
At my dance Saturday, a young couple came in, and he made it clear it was all her idea. He had been trying to play guitar for 4 months, he said, with no rhythm.
We coaxed him into counting to four in slow dancing. We allowed as how he probably wouldn't get Swing, so no pressure. Then I set up Merengue, and he actually seemed to be enjoying it in spite of himself.
I am surprised that there so few of this style practice party except by the chain studios.
Posted by Ellen at 2:24 PM No comments:

The Christmas Parade, Falmouth
Falmouth Dance Academy looked like they had almost a hundred kids dancing along the street in costume or at least FDA warm-ups, with the director alongside rolling the cart with the music boom box, a can the size of a chair. One wave of dancers "marched", one wave had a double circle formation, the next bunch did something else.
Wow. (Though nobody did Samba, the ultimate parade dance.)
The Shriners brought in a semi-trailer of clown props and performers, 10 clown cars, the Aleppo Oriental Band featuring men in Arab robes with baggy shiny pants and musical instruments.
The local clowns, the Suspenders, had maybe a dozen jugglers and unicyclists, a homey, friendly, non-glitzy group.
Posted by Ellen at 4:58 AM No comments:

Here we see part of what it takes: "To excel at this level, according to their Newton teacher, takes a rare combination of complementary talents and personalities, the financial means to train and travel extensively, and a ferocious work ethic."
Where is our ferocious work ethic?

http://www.boston.com/lifestyle/articles/2010/12/04/wowing_everyone_from_international_judges_to_tvs_stars_two_young_dancers_say_they_are_just_doing_what_moves_them/
Posted by Ellen at 5:02 AM No comments: 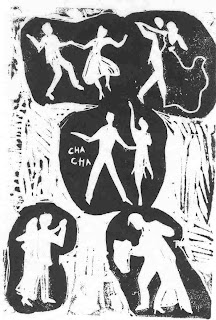 So Twentieth Century, even if it's a card you made yourself (ten years ago)!
I am a traditionalist, I guess, so I can send a photo.
Posted by Ellen at 5:55 AM No comments:

The Fred Astaire Dance Studio in Hanover gave up its franchise, but not its web address.
I congratulate Christine Harvey and Douglas Banks for going into independent status, but I wonder if they can get away with the photos of Fred Astaire on the website and the FADS address now standing for Finesse Academy of DanceSport. Maybe the DanceSport lawyers are ready to go to bat for them. That's the upcoming, tons of videos, franchise, and must be less expensive.
I note Tony Dovolani is listed as a visiting teacher. That could be fun!
On Cape Cod, Ballroom Bliss was advertising their teaching of a specific syllabus, DVIDA, and I wondered if they were taking the seminars in Las Vegas. Lately there is no mention of DVIDA, so probably not.
Posted by Ellen at 5:15 AM No comments:

As long as we aspire to be better than what we are, breathing in and lifting our heads high, philosophers are pleased.
When ambition comes in, the dirty desire to be better than our fellows comes in, ringed round by the fear we might be worse, followed by the knowledge that we will be worse as we age.
I don't think I want to see "Black Swan": Natalie Portman having starved herself thin enough and tortured her feet in pointe, portraying the nightmare life of a ballerina.
Posted by Ellen at 6:01 AM No comments: